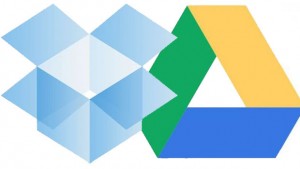 Like any bustling business, we here at Solamar spend a lot of time with our files — creating, storing and sharing them — and, also like many others, as the strength and reliability of cloud-based file management systems has grown, we have embraced the technology for its ease of use and ability to access our data wherever we might be.

While there are a number of these services available, for years now Dropbox has held the number one spot when it comes to cloud storage. In fact, with 50 million users, it’s likely that you, or someone you share files with already has Dropbox installed.

Recently, however, a new contender has jumped into the fray, and though it is a novice at cloud storage compared to Dropbox, it’s brought to you by everyone’s favorite “non-evil” mega-biz Google, and must therefore be carefully considered.

Here, then, is what we have discovered after comparing these services, so that you might better choose between the two:

On the surface, Google’s offering, Google Drive, and Dropbox are relatively the same. They both provide desktop synchronization of your cloud documents within a specified folder via an installable app, and allow you to access your documents through a web interface as well. Google includes 5GB of storage with a free account, to Dropbox’s 2GB, though Dropbox allows you to add space to the free account through referrals and other opportunites, up to a max 18GB (though you’d likely have to sign up your whole office). If you need more storage, you can pay for it with either service. For the purposes of this article, we will be focusing on the free accounts.

The idea here is that all of your file synchronization should happen in the background, with as little input from you as possible. Both services set up a folder on your computer which is a duplicate of your cloud-based folder. With both, you may also choose to sync the whole folder, or choose which files you would like to sync. Both apps accomplish this task well, though Google limits individual file size at 1GB, while Dropbox only limits file-size by the amount of storage you have.

If you are a Google Docs user, than you’ve probably already discovered Google Drive’s web app, since it replaced Docs in the Google toolbar when it was launched. In fact, integration with Google Docs is one of the single greatest reasons to choose Google Drive over Dropbox. Google Drive’s web app also lets you preview a variety of file-types, including images and PDFs, while Dropbox does not allow file editing at all, and will only preview publicly shared files. Both web apps also allow you to share files with those who haven’t installed either service yet.
File-Sharing

One of the greatest benefits of using a cloud-based file storage system is that it allows you to share files from an organized system, rather than emailing an attachment. Both services have private and public sharing, and also allow you to create a link that gives anyone who uses it access to the particular file it references. The differences between the two come in how they include shared data in your quota. Google excludes the data from shared folders when calculating your usage, while Dropbox adds all data from all of your shared folders to your quota, which can quickly use up your space if you share a lot.

Another distinct advantage of using one of these services is that it automates “version control”, the process of storing and tracking all changes to a file over time. Both Google Drive and Dropbox utilize this technology, but their approaches have key differences. Dropbox lets you keep an unlimited number of revisions for up to 30 days, and doesn’t count the size of the revisions against your quota. Google Drive stores up to 100 revisions of a file for 30 days, and does count their size against your quota. Google’s interface is also much clunkier, and won’t allow you to automatically replace the version in your local folder with an earlier version. It will, however, allow you to visually compare differences in versions of your Google Docs.
Deleting

Here, Dropbox has the clear advantage. Google Drive, uses a trash folder to store deleted folders, counts that storage against your quota, and then once you empty the trash, the file is deleted permanently. Dropbox doesn’t count deleted files towards your quota and will allow you to restore deleted files for 30 days. You can still delete files permanently if you want via the web app.
Mobile Sync

Dropbox and Google Drive both have apps for iOS and Android, and Dropbox offers a Blackberry version as well. Google Drives app is functional, but Dropbox’s beats it out with a feature set that includes the ability to display photos in a gallery, to simply store files locally on your mobile device, and easy uploading.
The Conclusion

While both services are strong, Dropbox wins out with better versioning and sync, despite Google’s larger number of sharing options, though if you are a heavy Google Docs user, you might stick with Drive. In the end, I use both, one for business and one for personal (though admittedly, this is partially so I can continue to follow their progress). I hope this been helpful, and made making your way in the world of cloud-based storage a little easier.