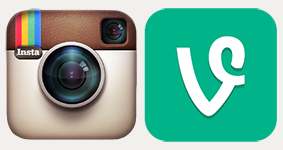 As social media has taken over the marketing landscape, brand promoters have had to find ways to condense their messaging into increasingly smaller formats. First it was the limited wall post, then the 140-character tweet. The instagram photo, the pinnable image, the hashtag, we communicate to the public in ever briefer broadcasts. It was inevitable that this culture of brevity would make its way into the realm of video.

In January of this year, the free iPhone app Vine (owned by Twitter) was released. Using the app allows users to record 6-second videos and share them. Recognizing the broader scope of communication capable via even an extremely short video, and already trained to produce media content by Instagram, the social media public took to Vine very quickly. Within months, it became the number-one video-sharing app in the app-store, as well as the free app with the most downloads.

In June, the Facebook-owned Instagram service countered by adding video to its already popular photo-sharing service, with an increased recording time of 15 seconds. The race was on, and here we are only a few months later and major brands (including McDonald’s, XBOX, Virgin Mobile and more), have already embraced both services. It’s clear that video-sharing is something that is going to stick around for the near-future, and it’s time to engage with it now.

So, which service to use, and what to do with it? That’s what we’re here for! Stick around and we’ll go through some tips for the best ways to engage.

The More the Merrier

As to the question of which service to use, Vine or Instagram Video, the quick answer is both! Each has it’s own community, and by engaging with both, you increase your exposure. Also, given their owners, I’m sure that we will see further efforts to increase value for users of Facebook and Twitter in each of their respective video-sharing apps. However, that doesn’t mean we can’t discuss their individual advantages.

Instagram Video has the obvious advantage of the extra 9 seconds of recording time, but it also has a set of filters similar to the ones it offers for photo-sharing and the limited capability to edit your video.

Vine requires you to record your video sequence in order and is uneditable, but it’s shorter recording time is truer to the Twitter mentality, and more quickly digestible. And, crucially, its videos loop, creating a GIF-like aesthetic, and allowing for some fun tricks.

Take Your Time, And Have Fun!

Shooting an attractive video is a lot more difficult than shooting an attractive photo. With Instagram, the filters did a lot of the heavy lifting, but a marketing video requires planning. It needs to tell a story, while walking the fine line between promoting a brand and pushing too much. Keep it simple, you don’t have time for elaborate concepts. Be creative, be funny, make content whose primary purpose is to engage people’s interest. Once you have an idea for what you want to produce, practice, practice, practice! Don’t broadcast the first thing you shoot. Make sure you have your video exactly right before you send it out into the world.

You know the deal. Social Media is a back-and-forth environment, and in order to see the best return on your time-investment, you need to actively engage with the community you are sharing content with. Find other users of the services who you think share an affinity with your brand (and who might promote it), and follow them. When they post, comment and like their stuff.

There are a few specific things you should know before you begin to shoot with your camera. First, be careful before you decide to include any kind of a pan, tilt or other camera move in your film. Time is precious when you only have seconds, and those kinds of moves can take a lot of time. If you must utilize a camera move, than make it snappy.

Though it has a reputation as time-consuming, consider using stop-motion. In such short segments, you can actually create stop-motion videos with relative speed, and they add wonderful style to the finished product when done correctly. If you are doing stop-motion, or any other video you don’t want audio with, don’t forget to cover the mic on your phone with your thumb or a piece of tape.

Vine and Instagram Video can be an incredibly fun social media experience to participate in, and the posts can show a wide variety of creative ideas. Don’t take my word for it! Here are some great examples of the kinds of things that are possible:

One thought on “THE RISE OF BITE-SIZE VIDEO”