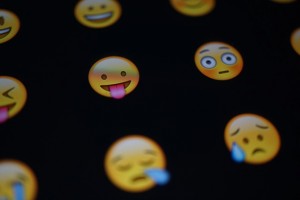 First things first. Before you find out about the growing and changing use of emojis, you have to know what an emoji is. It’s a small digital image or icon (a pictograph) used to express an idea, emotion, etc., in electronic communication. Emojis, which come in a vast range of shapes, colors and motifs, started in the late 1990s in Japanese electronic messages and spread across the world. They have become common and are now included in Apple and Android operating systems.

You should also note that emojis and emoticons are not the same and should not be confused. Unlike an emoji, that is a digital image or pictograph, an emoticon is a representation of a facial expression such as “:-)” (representing a smile), formed by various combinations of keyboard characters and used in electronic communications to convey the writer’s feelings or intended tone.

The Guardian reports, “To complicate matters, some emoji are also emoticons. The standard for the characters breaks them apart into sets by theme. Most are filed under Miscellaneous Symbols and Pictographs, but the emoji which depict emotive faces are separated out as emoticons.”

Emojis, millenials and Gen-Z (oh my)!

Everyone knows that brands have been pursuing the millennial market for their size, influence, growing incomes, and their insatiable appetite for digital media. But that’s changing in 2015, as the eldest millennials are well into their 30s and marketers are shifting their attention to Generation Z (those born just before the turn of the century).

These Gen Z-ers grew up in our social, mobile and digitally-connected world, where they communicate with text messages and, increasingly, with emojis—single images that convey emotion such as a wink, a smile, or a heart.

What using emojis says about your brand

Not to be left behind, brands are turning to emojis to speak the language Gen-Z understands and uses every day on their smart phones and tablets. Using emojis says brand marketers are:

Want to know more about the meaning of a wide variety of emojis? You might want to check out the Emojipedia and HubSpot’s Emojis for Dummies.

Emojis have been at work in brand campaigns

They say a picture is worth a thousand words. But, when it comes to emojis the results from around the world speak for themselves…and are worth millions in terms of words and dollars!

In the past year or so, dozens of brands started testing marketing with emojis. Here are just a few examples:

As soon as any new content marketing vehicle becomes popular, more and more marketers want to jump on the bandwagon. It stands to reason that the more consumers that are using emojis, the more marketers will join in and try emojis with their own target audience.

While it’s too early to tell if emojis will be highly successful for everyone, their popularity and growth seems to indicate that they are the wave of the future. Many marketers agree that it’s only a matter of time before emojis become mainstream.

Want to know how to effectively integrate emojis into your own marketing communications? Talk to Solamar…we’ve got the experts who speak emoji in the language you and your customers can understand.