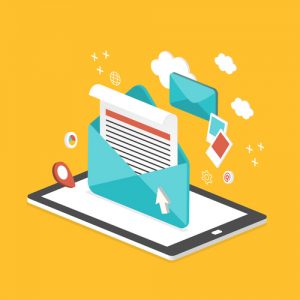 When it comes to the digital age, email is as venerable as they come, and this aging form of communication isn’t letting the younger generation kick it around either. Though most of us have embraced various forms of instasnapaging, email remains a central pillar of how we talk to each other.

But it’s not as though email has stood unchanged for all this time. We’ve progressed from boring old plain-text designs to beautiful layouts with all the branding and graphics your little heart could desire. We’ve moved from static delivery of information to interactive emails that allow the reader to engage and respond. We’ve built automation systems that make it possible to have complicated and extended relationships with our readers.

That’s why, just like other more visible parts of our digital experience, it’s important to stay on top of how email is evolving, so we continue to take advantage of new techniques and technologies. So what’s new in 2016? Let’s take a look, shall we?

Sharing emails is nothing new, we’ve been putting social share icons into HTML emails forever, but lately we’ve been seeing folks make individual section of the email shareable. Since email newsletters often contain multiple content sections, this allows people to share only the part of the newsletter they are interested in, which increases the likelihood that they will do so. This is also a useful tool for spreading marketing messages or hashtags. Simply place an inline link that generates a tweet, complete with message and hashtag already in place.

Watch Out For Watch

Wearable electronic devices have been around for a (fit)bit now, but when Apple introduced Apple Watch in 2015, and brought wearables to it’s vast consumer base, it meant email designers suddenly had to contend with an entirely new format to include when considering their layouts. With such a small screen, Apple Watch cannot display your carefully and beautifully designed HTML emails, and will often default to a text version. On top of that, it will sometimes break your links as well. This is causing all kinds of problems, skewing open and click analytics, and making emails untrackable using the current method of embedding a transparent tracking pixel. Thankfully, some folks over at the email testing lab Litmus have discovered that it is possible to embed a hidden version of an email that only Apple Watch will display. If your readership includes a lot of early-tech adopters, than you might want to consider giving this a try.

Sure, with modern email marketing we can tell when people open and click things in our newsletters, but that really is only a surface picture of how our emails are affecting our readership. So, why not ask them directly? More and more often we are seeing emails ask for quick feedback on the quality of the email itself, usually in some binary form like a “Yes, I liked it,” or “No, I did not like it.” If you think knowing whether people are actually enjoying your emails rather than just opening and clicking them, than this might be your ticket.

Let Your Unsubscribe Link Out

Last year saw Google introduce a “block” feature which allows users to completely block emails from a sender forever. This year, we’ve seen indications that people are beginning to use that feature instead of the senders unsubscribe link, especially if that link is hidden in tiny text at the bottom of your emails. Since having people unsubscribe from your list is preferable to never being able to send them an email again, it is now best practice to make your unsubscribe link much more prominent in the email, so that it is easily findable.

Ok! The world of email is certainly becoming a much more interesting place, and I hope these tips make designing and sending the best emails easy. Now, if only Microsoft would make Outlook function like every other email client in the world, we’d be in email nirvana! Silly Microsoft.

Want your email newsletters to be ahead of the curve? Give the design team at Solamar a shout!