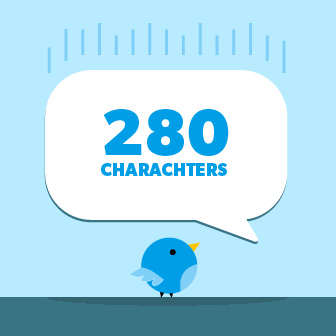 140 characters is an arbitrary limit, given its archaic SMS heritage and the fact that you can’t write any sentence longer than this one is. Which is why, after a brief period of testing to a limited subset of its users, Twitter is finally increasing its character count for most users to 280.

The only ones left out of the fun are Japanese, Korean and Chinese language users. Because those languages are non-alphabetic and contain many logographic symbols, they don’t experience what Twitter calls “cramming”, and so don’t require the expanded count.

Of course, with any big change to a fundamental system comes the inevitable backlash from some part of the user-base, even if that community isn’t quite as vociferous as Twitter’s tends to be.

Brevity is the Soul of Wit

One of things that made Twitter unique was the tight limit on characters. There are plenty of other platforms where longer form posts are possible, having to write succinct phrases was part of the fun (said the writer)!

However, Twitter is flashing some research data around that indicated people will self-limit to shorter posts after a brief period of ostentatious for-the-fun-of-it character over-usage.

The data also shows that while 9% of all tweets hit the limit when it was 140, only 1% of tweets do it with the 280 limit, which should mean a less frustrating experience for the content creators.

What this all means is that in general, after people get used to it, they predominantly keep things short anyway, but spend less time having to tweak their wording just to wiggle under the character count limbo bar. And for those prone to tweetstorms, your endless ranting will now take up less space in everyone else’s feed. Hooray!

Do I Need to Do Anything?

Nope. The new limit is yours automatically, without any action necessary on your part. Don’t forget to say thank you (preferably in 280 characters or less)!

Want to stay up to date on the latest social media news? Subscribe to our newsletter!