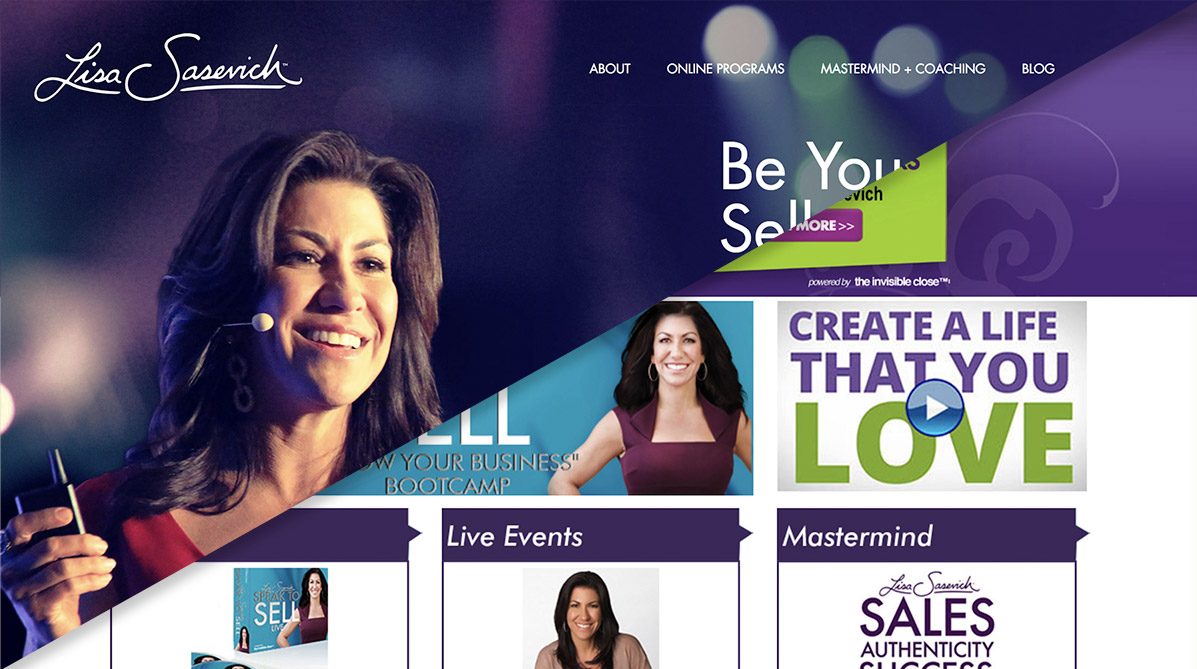 A little over a year ago, the Solamar design team began working on a really exciting project that we’ve been keeping under wraps, and a few weeks ago we finally got to reveal it to the world — a redesign of Lisa Sasevich’s website!

If you don’t know who Lisa is, you really should. Often called “The Queen of Sales Conversion”, Lisa has helped over 15,000 clients from over 130 countries in the course of her amazing career, and was named one of Inc. Magazine’s fastest-growing privately held companies for two years in a row.

It was a real honor for the peeps here at Solamar to undertake such an important design project for such an illustrious client, and we’re super-psyched for what a modern web presence is going to do for her, her biz and the many, many people she helps on a daily basis.

How did we approach this incredible project? Stick around, and we’ll walk you through it.

Out With The Old

Lisa’s existing site had a number of issues. It was difficult to navigate, felt crowded and needed some typography and design love. In addition, it had a couple of modern web-design no-no’s, like having a bunch of text in images and only minimal responsiveness. All of her internal pages followed the same layout, which for many of them meant a bunch of wasted space when her sidebar wasn’t being used. Her contact page didn’t include a form so that people contact her directly from the page.

Lisa also had a ton of content spread out over many different sites, with inconsistent branding across all of them. Keeping them all in line with each other was becoming a bit of task, not to mention difficult for her customers to deal with. She needed to consolidate her content into a single home which would be easy for her to update, and easy for people to find.

In short, she needed our help!

In With The New

We started Lisa off with an extensive mockup period, going through many different possible looks for her new site. During this phase we went wild with different concepts, really letting our imaginations out on a pretty long leash. After that, we had a pretty good idea of which direction we should be focusing in on, and ended up settling on a design with clean lines, a bright, bold color palette that remained consistent with her existing product line and branding, and plenty of delicious white-space for that all-important breathing room.

Her user experience received a much needed upgrade as well, with clear pathways and action choices for anyone interested in pursuing any of the many offerings Lisa has available. We simplified her navigation, and made sure that the layout of each page complimented the content within it, rather than forcing content into an already existing template. Her blog and podcast now live together in harmony, and are easy to search and listen to. We added a form to her contact page so that people could reach out to her directly, and we made the whole thing completely responsive, so that it looks good on any device it happens to be loaded on.

Finally, we did a lot of work on the admin side of the site, making sure that Lisa and her team were able to edit and add new content, products and events easily, without needing to code anything. We use WordPress to build sites, so everything starts out pretty user friendly to begin with, but we also built custom interfaces designed especially for her specific needs.

We’re so, so proud of Lisa’s new site and we hope you take a second to go take a look at it. If you’re in need of a spiffy new site design, than give the Solamar team a shout!